The first and only fanfic I’v ever written. Oooooooooooold, Like, from whenever it was I first started reading Naruto. Way before any of you knew me;)

I was re-reading the part where Chiya brings Gaara back to life using Naruto’s chakra. The way the lives of Gaara and Naruto are paralleled in the scene still makes me cry every single time. How they’re both alone at first, how Naruto finds people who love and acknowledge him but Gaara is left sitting alone on the dry desert ground. I happened to be listening to the Hedwig and the Angry Inch sound track at the same time and “The Origin of Love” just struck me as the perfect song for those two. The lyrics tell a mythical story of how mankind first discovered love, and just like Gaara, the song doesn’t see it as a beautiful peaceful thing but a source of life long pain. Especially the last verse which is quoted in the beginning of the fic. The lyrics can be found in full here: http://www.stlyrics.com/lyrics/hedwigan ... oflove.htm

((I’m also thinking of doing a Zabuza/Haku AU fic based on “Sugar Daddy” from the same film. Lyrics on the page linked above))

This happens before they separate at Chiya’s grave. I don’t know what or where or why the house is, I just needed a setting

I’m sorry for the clichéd sappiness and for the fact that it’s unbeta-ed, messy and clumsy and probably very wrong canonically in places. This was written in 30minutes because it wouldn’t stop haunting me before I got it out of my system. And I apologise for the excessive use of the pronoun “he”, I hope it’s no terribly unclear. And the ending isn’t meant to sound dirty. You pervs.

Also: cookies to those who pick up the Elton John quote.


Last time I saw you
We had just split in two.
You were looking at me.
I was looking at you.
You had a way so familiar,
But I could not recognize,
Cause you had blood on your face;
I had blood in my eyes.
But I could swear by your expression
That the pain down in your soul
Was the same as the one down in mine.
That's the pain,
That cuts a straight line
Down through the heart;
We call it love.
So we wrapped our arms around each other,
Trying to shove ourselves back together.
We were making love.

I had to fight you to see you. You had to die for me to find you. I had to cross the river to get you back. After everything we’ve been trough, what’s left to prove? I was the lucky one, I was saved before my loneliness ate me alive. I want to save you. Tell me I’m not too late.

You are creature from a childhood dream, the one colourful person who sees me in the slow motion monochrome world where the street is full of people and they all pass me by although I scream and scream. You’re there on the street corner, so bright you hurt my eyes and you look straight at me like no one else has ever done before. And I feel exposed, vulnerable, scared, and I hurt you to make you turn away because I cannot handle all the colours of the rainbow at once after years of numb darkness.

Am I too late? I’m sorry it took so long.

Can’t you read my mind? I cannot tell you, words hate me just like everything else. See me. See me! If anyone can do it, you can.

You’re me, I’m you. We share a fate that no one should be forced to endure. We were meant to meet sooner but we got lost on the way.

Come here, let me warm you up. Sleep. You look tired. I’ll keep the world out, no one can touch you here. Let your guard down, rest your arms. I’ll be your arms, your eyes, your sand.

He looks fragile and lost without the leather around his upper body and the huge gourd usually permanently attached to his back. His bare feet make no sound on the cold floor, the white sash drags behind him as he crosses the room to him. He is suddenly, painfully vividly reminded of the time they fought each other, both of them spent, bleeding from their foreheads, their bloods mixed together. He stops and looks into his eyes. He’s still lonely, he can see that, but the veil of pain is gone. Then he closes his dark rimmed eyes and dry lips touch the whisker marks on his left cheek. A wave of sadness hits him, the unfairness of the world to have let this beautiful creature suffer, to have kept him away, and kept himself away from helping earlier. He puts his arms around him and runs his fingers down the sharp spine, like the stalk of a wild rose. Every thorn is familiar to his fingers, he’s been here before and though he can’t remember when and what’s going to come next he knows exactly where to go.

They don’t talk. For a second he wonders if he should say something, but for once he is lost for words. Then he feels cold fingers brush the back of his neck and knows that there are no words for this. Rough black fabric seems to be obeying his thoughts, with the slightest touch it falls on the floor, leaving the other naked in his arms, except for the air thin white sash around his neck.

He’s all bones and skin so thin he’s a little afraid to touch it in case it rips like paper. But he presses himself against him, shivering, and tugs on the zipper of his jacket. “You’re far away.” “I’m right here.” He sits down on the clothes on the floor and looks up at him. His hair is almost black in the half light, all the rest of him the colour of moonlight, dark eyes and the bitter mark on his forehead stand out clearly. He extends his arm up to him, and he lowers himself on top of him, allows thin, trembling fingers peel his clothes off.

They fit together perfectly, he’s almost hollow, for him to fill. Jade green eyes are hazy, lids half closed, but never leave his. It’s the first time in his life when he doesn’t feel clumsy, their bodies speak the exact same language. Perfect sync, perfect harmony. This is love, he thinks, two imperfect, broken halves moulded anew in that moment of perfect harmony. He wants to touch every bone in his body, he is fascinated by the way the skin stretches over his chest when he throws his head back because he likes something his done inside him. He runs his fingers down his sides, over his ribs to his slim hips, holding him tightly against himself. His fingers are in his hair, pulling out yellow strands. It’s quiet, their breathing and the faint rustle of the fabric moving with them the only sounds in the night. He wanted this never to stop, but it does, the lithe body underneath him curves up from the floor in an ethereal arch, his head thrown back, then he has to close his eyes and the lights behind his eyelids are impossibly bright and he shakes and collapses on the body under him. Soft exhale in his ear, then its quiet again.

He surprises him by extending his hand first. And he takes it, they shake hands in the graveyard of their old lives. I fixed him, he thinks, watching the other walk away. He’s a little sad. Is he mine to fix anymore? 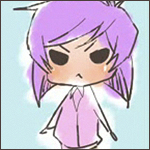 Yozora
Unfit to be a Gundam Meister